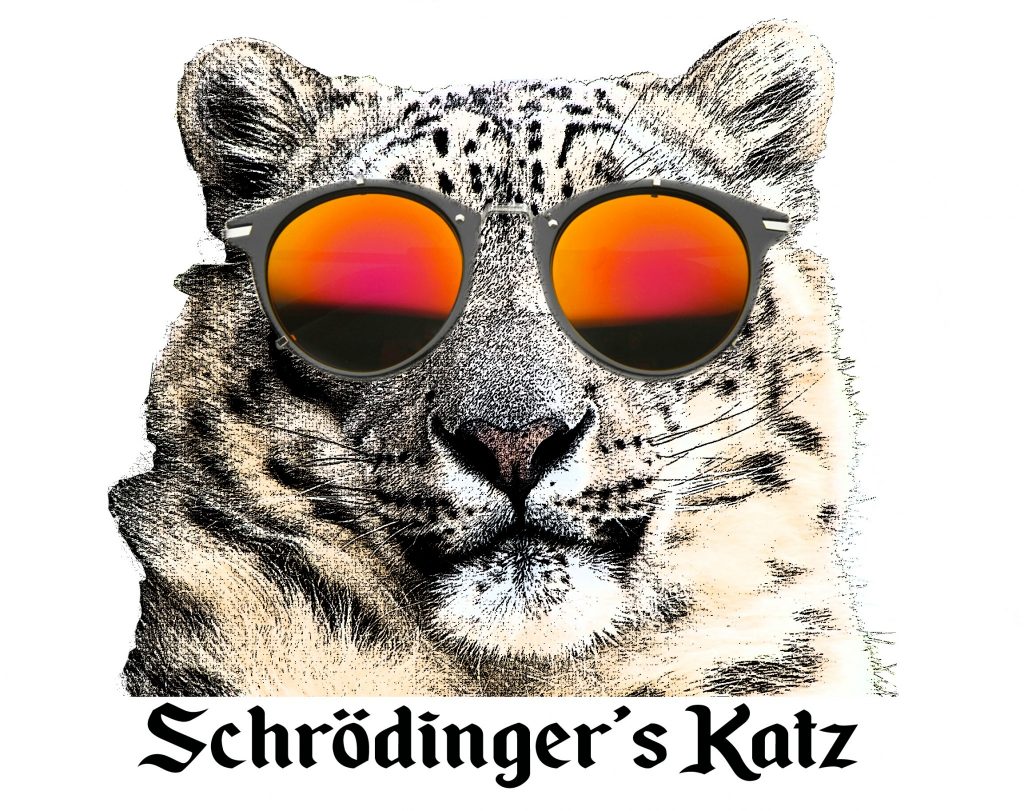 Einstein is of course famous for his General Theory of Relativity, among many other scientific accomplishments. But he was also a very good violinist! “Music helps him when he is thinking about his theories,” said Elsa, who became his second wife in 1919. “He goes to his study, comes back, strikes a few chords on the piano, jots something down, returns to his study.”  The great physicist himself once said that if he hadn’t been a scientist, he would certainly have been a musician. 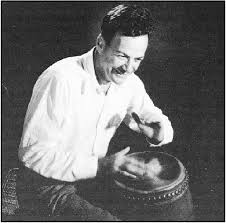 Feynman was awarded The Nobel Prize in Physics in 1965 for his “fundamental work in quantum electrodynamics, with deep-ploughing consequences for the physics of elementary particles” along with two other scientists. But he was also very interested in rhythm and drumming. When working at Cornell University, Feynman “had a sabbatical in 1951–52, and elected to spend it in Brazil, where he gave courses at the Centro Brasileiro de Pesquisas Físicas. In Brazil, Feynman was particularly impressed with the Samba music, and learned to play a metal percussion instrument, the frigideira. He was an enthusiastic amateur player of bongo drums and often played them in the pit orchestra in musicals.” (Wikipedia)

You can see him playing bongos here. 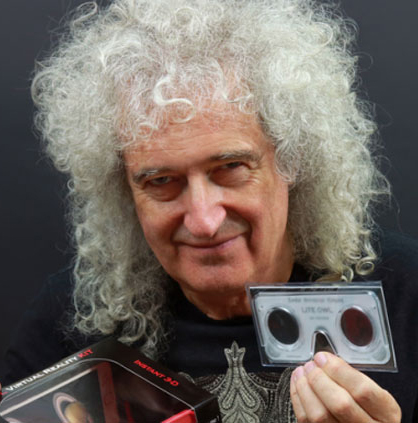 He’s best know as the lead guitarist for the rock band Queen, but not many people know that he also has a PhD in astrophysics!

“From 1970 to 1974, he studied for a PhD degree at Imperial College, studying reflected light from interplanetary dust and the velocity of dust in the plane of the Solar System. When Queen started to have international success in 1974, he abandoned his doctoral studies, but co-authored two peer reviewed research papers, which were based on his observations at the Teide Observatory in Tenerife.

In October 2006, May re-registered for his PhD at Imperial College and submitted his thesis in August 2007 (one year earlier than he estimated it would take to complete). As well as writing up the previous work he had done, May had to review the work on zodiacal dust undertaken during the intervening 33 years, which included the discovery of the zodiacal dust bands by NASA’s IRAS satellite. After a viva voce, the revised thesis (entitled A Survey of Radial Velocities in the Zodiacal Dust Cloud) was approved in September 2007, some 37 years after it had been commenced.” (Wikipedia)

You can listen to him shred here on Dead on Time by Queen. 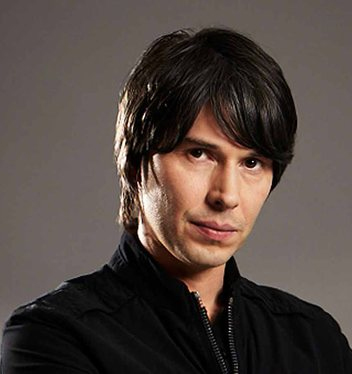 School of Physics and Astronomy at the University of Manchester. He is best known to the public as the presenter of science programmes, especially the Wonders of… series and for popular science books, such as Why Does E=mc²? and The Quantum Universe. He has been the author or co-author of over 950 scientific publications.” (Wikipedia)

But he certainly looks the part of the brooding pop star, and for a time, he was! “In the 1980s and early 90s, Cox was a keyboard player with the rock band Dare. Dare released two albums with Cox – Out of the Silence in 1988 and Blood from Stone in 1991. He joined D:Ream, a group that had several hits in the UK charts, including the number one “Things Can Only Get Better”, later used as a New Labour election anthem, although he did not actually play on the track.” (Wikipedia)  Here’s D:Ream with their hit Things Can Only Get Better. 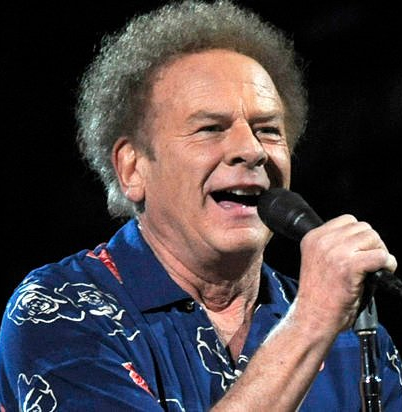 He is of course famous for being half of the pop rock duo Simon & Garfunkel, but did you know he was also a mathematician of sorts?

“After graduating from Forest Hills High School alongside Simon, Garfunkel initially majored in architecture at Columbia University, where he was a brother in the Alpha Epsilon Pi fraternity. Garfunkel was a team member in tennis, skiing, fencing, and bowling at the College and also joined the all-male a cappella group on campus, the Columbia Kingsmen. He ultimately earned a B.A. in art history in 1965, followed by an M.A. in mathematics education from Teachers College, Columbia University in 1967. Garfunkel also completed coursework toward a doctorate in the latter discipline at Teachers College during the peak of Simon & Garfunkel’s commercial success.” (Wikipedia) 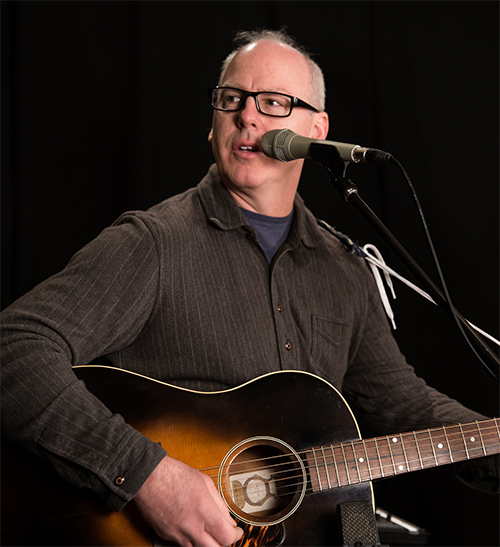 and author. He is most recognized as the lead vocalist, songwriter, and only constant member of the noted Los Angeles band Bad Religion, which he co-founded in either 1979 or 1980. He also embarked on a solo career in 1997, when he released the album American Lesion. His follow-up album, Cold as the Clay was released nine years later.”

We couldn’t find one of Bad Religion’s hits that appropriate for all ages, but you can see a list of their most popular hits here. We promise he’ll keep it clean for the Quantum Ball!

Yes, that Braille, the one who invented a system of reading and writing for the blind back in the early 1800s.  Always camera shy, we couldn’t find a good photo of Braille, and instead he submitted this bust of his likeness.

“Because of his combination of intelligence and diligence, Braille was permitted to attend one of the first schools for blind children in the world, the Royal Institute for Blind Youth, since renamed to the National Institute for Blind Youth in Paris. He proved to be a highly proficient student and, after he had exhausted the school’s curriculum, he was immediately asked to remain as a teacher’s aide. By 1833, he was elevated to a full professorship. For much of the rest of his life, Braille stayed at the Institute where he taught history, geometry, and algebra.

Braille’s ear for music enabled him to become an accomplished cellist and organist in classes taught by Jean-Nicolas Marrigues. Later in life, his musical talents led him to play the organ for churches all over France. A devout Catholic, Braille held the position of organist in Paris at the Church of Saint-Nicolas-des-Champs from 1834 to 1839, and later at the Church of Saint-Vincent-de-Paul.” (Wikipedia)

Unfortunately, we don’t have any recordings of his to share. But here’s some seriously awesome organ music!

Scientist, inventor, diplomat, statesman, newspaper man … Franklin was a multitalented person! We all know the story of him flying his kite in the 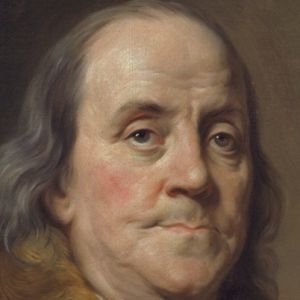 thunderstorm to demonstrate that lightning is electricity. Sounds dangerous, but apparently he knew enough to stand under shelter in a dry spot and stand on an insulator to keep himself safe.

But he was also a musician! “Franklin is known to have played the violin, the harp, and the guitar. He also composed music, notably a string quartet in early classical style.” Not content to just play the same old instruments as everyone else, “he developed a much-improved version of the glass harmonica, in which the glasses rotate on a shaft, with the player’s fingers held steady, instead of the other way around; this version soon found its way to Europe.” (Wikipedia)

Here is a performance of Dance of the Sugar Plum Fairy on the armonica. Note, this is not Benjamin Franklin playing! 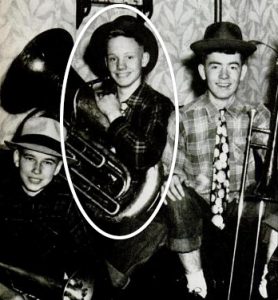 He was the first man to set foot on the moon, but before that he was a nerdy band kid like so many before him. He came from a musical family, and his mother taught him to play the piano at an early age. When he got to Upper Sandusky School in Ohio, he joined the band and took up playing the baritone horn. He then went on to great fame as an astronaut, and also became a university professor.

“Neil Alden Armstrong  was an American astronaut, engineer, and the first person to walk on the Moon. He was also an aerospace engineer, naval aviator, test pilot, and university professor. Before becoming an astronaut, Armstrong was an officer in the U.S. Navy and served in the Korean War. After the war, he earned his bachelor’s degree at Purdue University and served as a test pilot at the National Advisory Committee for Aeronautics (NACA) High-Speed Flight Station, where he logged over 900 flights. He later completed graduate studies at the University of Southern California.” (Wikipedia)

Here is Neil Armstrong in one of the most famous recordings of all time.

Alexander Borodin was a Russian composer of classical music. “Borodin is best known for his symphonies, his two string quartets, the tone poem 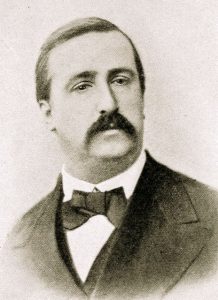 In the Steppes of Central Asia and his opera Prince Igor. Music from Prince Igor and his string quartets was later adapted for the US musical Kismet. A notable advocate of women’s rights, Borodin was a promoter of education in Russia and founded the School of Medicine for Women in Saint Petersburg.” (Wikipedia)

But, again, he was also a scientist, specifically a chemist and a doctor. “As a chemist, he is best known for his work in organic synthesis, including being among the first chemists to demonstrate nucleophilic substitution, as well as co-discoverer of the aldol reaction.” (Wikipedia) Bet you didn’t know that!

Here is Borodin’s striking Second Symphony. His orchestrations promise to bring depth and drama to the Schrödinger’s Katz!

Schrödinger’s Katz is still auditioning for a bass player!
If you know of anyone, send them our way.

You can help support these exciting programs by donating online or sending a donation to PO Box 4669, Aspen, CO 81612, or by emailing email hidden; JavaScript is required. All donations are tax-deductible to the extent of the law.