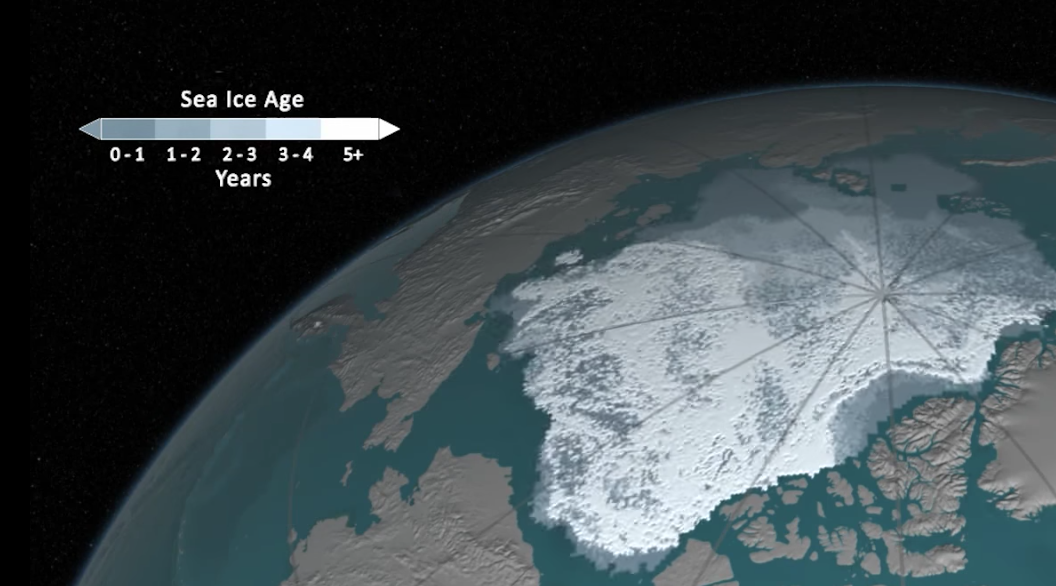 By Mike Simmons
Posted March 4, 2018
In ASC Reporting, Global Climate Change, Science News
1
0
David Houggy, President
Aspen Science Center
The polar ice cap is shrinking. Of that there can be no doubt, despite what you may here.  Need proof? Check out this time-lapse video from NASA.

The video is fascinating, even mesmerizing. The ice ebbs and flows, swirls and drifts, creating a kaleidoscope of patterns over time. It would make an interesting piece of art if it weren’t so damn depressing.

As proof goes, it’s pretty convincing, because it is not a simulation or computer model (although it is animated). It uses images that NASA collects via satellites by tracking individual ice floes based on their unique passive microwave radiation signatures over time.

The whiter ice of the Polar Ice Cap is the older sea ice that is formed when ice doesn’t completely melt one summer. When the next freeze comes, that ice floe grows in size. Over the winter, the arctic builds up to a typical depth of 2-3 meters (6 to 10 feet), although it can grow to double that in some places. As the thicker, older ice has been thinning over time, it becomes easier to break up, which makes it melt that much faster. Unfortunately, “we’ve lost most of the older ice. In the 1980s, multiyear ice made up 20 percent of the sea ice cover. Now it’s only about 3 percent,” according to cryospheric scientist Dr. Walt Meier of NASA Goddard Space Flight Center. “The older ice was like the insurance policy of the Arctic sea ice pack: as we lose it, the likelihood for a largely ice-free summer in the Arctic increases.”

What does that mean? Basically, NASA uses computers to look at a microwave image of the ice cap and identify individual ice floes using object recognition software. Once identified and labeled, NASA then measures their microwave radiation signatures (their “color” patterns, except here the “color” is in the microwave range, and not visible to the human eye). Then with each subsequent image they can track those individual ice floes over time as they drift about. This process is made easier by the fact that the icebergs are drifting relatively slowly, so they don’t move that much from one data point (image) to the next. This is a rather ingenious set of inventions to enable this critical research! It is also a good example of the critical need for more research of this type, not less as some advocate.

“These instruments gauge brightness temperature: a measure of the microwave energy emitted by sea ice that is influenced by the ice’s temperature, salinity, surface texture and the layer of snow on top of the sea ice. Each floe of sea ice has a characteristic brightness temperature, so the researchers developed an approach that would identify and track ice floes in successive passive microwave images as they moved across the Arctic. The system also uses information from drifting buoys as well as weather data.”

Turns out that this data collection methodology was developed at the University of Colorado, Boulder. The university also spearheads an effort to track arctic sea ice using unmanned aerial drones. This latter projected has spawned a secondary benefit: tracking seals that live and travel on the ice floes, using special visual recognition software. Apparently different types of seals prefer different types of ice, and now they can measure the microwave signatures of those types of floes to see where they drift.
Fascinating stuff.
aspen science center, Global Climate Change
Recommended Posts